Hello and welcome back. It’s been a while. Everything has changed since I made my last original post in January 2014 (Ernie Pyle was a rerun). If you’ve just happened onto “One Wall at a Time,” my dear husband Mike died March 9, 2014. Although his health wasn’t the best, his death was unexpected. His death certificate says “sudden cardiac death” with pneumonia and congestive heart failure as underlying causes.

Something else was going on with Mike. Even before he got sick, he was having trouble thinking things through. He would look at his insulin pump and not understand how to give himself a dose or he wouldn’t remember if he told it to give a dose. Mike had had a pump since 1995. He knew how to work it.

One night on the way home from church, we were driving through the neighborhood and he said it sure was a good thing that I knew where I was going because he didn’t know where we were. We were only a few blocks from our house. These weren’t the only signs that something was wrong.

When Mike went into the hospital on Feb. 18 last year, I was taking a graduate class at the University of North Texas called Magazine Writing and Publishing. The class puts out Mayborn Magazine, which features profiles of a few of the writers who will be speaking at the Mayborn Literary Nonfiction Conference held each July. My writer was a young man named Sam Kean. He’s written three best-selling science books — The Disappearing Spoon and Other True Tales of Madness, Love, and the History of the World from the Periodic Table of the Elements; The Violinist’s Thumb and Other Lost Tales of Love, War, and Genius, as Written by our Genetic Code; and The Tale of the Dueling Neurosurgeons, The History of the Human Brain as Revealed by True Stories of Trauma, Madness, and Recovery.

When I was reading Dueling Neurosurgeons, I came across a passage that talked about the back of the brain controlling the body’s automatic functions and in a flash I knew what had happened to Mike. He had fallen twice putting up Christmas lights and once taking them down, each time hitting the back of his head on the ground. He always laughed it off — didn’t want to go to the emergency room. But later he said several times that he thought he had snapped his neck because the back of his head and neck hurt. I think those injuries gradually shut his body down.

What I realized about Mike ended up being part of my story on Sam, “The Boy Who Loved Mercury.” I’m posting this now because, although the story will still be up under the past issues link, we’re working on a new issue now and soon those stories will be the featured stories on the Mayborn Web site.

If you enjoy reading, please look at the other stories in the magazine (link below). Amelia Jaycen won first place in the Region 8 Society of Professional Journalists Mark of Excellence Awards for student journalism for her story on Dennis Overbye and Kristy Blackmon’s story on Annie Jacobsen was top finalist. Then the magazine won Overall Excellence in the General Magazine category and Sweepstakes at the Texas Intercollegiate Press Association awards.

Other awards received at TIPA were: 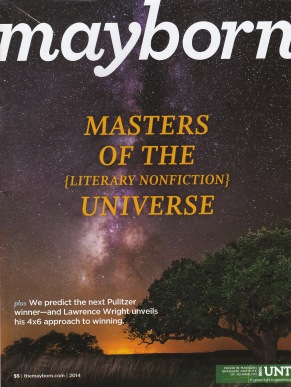 I was proud to be part of this group, and I’m excited to have a story in the new Mayborn Magazine that will be released in July. More about that later. Thanks.

2 thoughts on “Welcome back”

The Archer City Writers Workshop
A Life of Words

Words tell stories. Stories tell us about people. People make our lives whole. So do words.